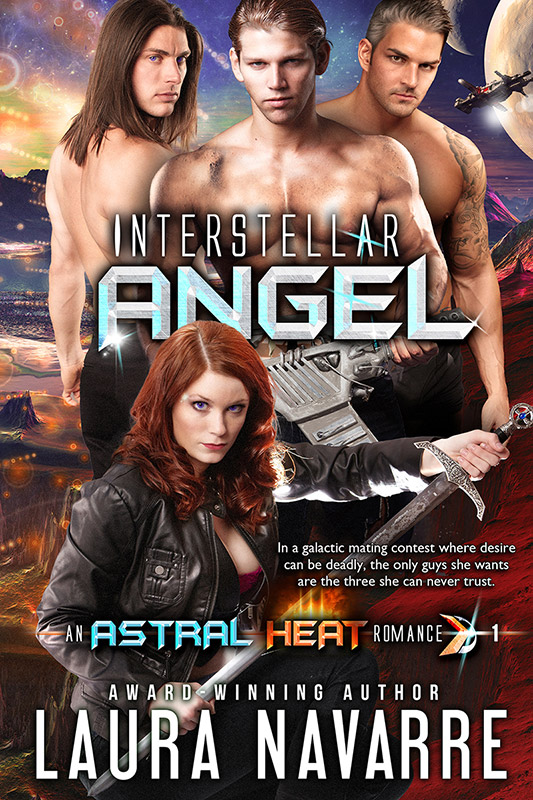 Get Interstellar Angel
Back to Reverse Harem Sci Fi Romance

In a galactic mating contest where desire can be deadly, the only guys she wants are the three she can never trust.

In a faraway galaxy on the edge of apocalypse, cyber samurai Kaia of Kryll is the daughter of a tyrant who’s worshipped as a god by billions. A prison sentence she’ll kill to escape, since women like Kaia are worshipped in chains. And she’s just become the prize five hundred testosterone-fueled suitors will lie, seduce, and slaughter to possess in a ritual contest for her bed.

In the scramble to slip past her samurai defenses into her cybersuit, the only guys she wants are the three she can never trust. These four have a boatload of shared secrets and a shared passion so combustible it’s practically pyrophoric—breaking every dangerous rule on a world where lovers are crucified for unconventional unions. Their illicit heat will either end the war destroying all their races…

Or get the four of them killed when a god unleashes a fatwa for their heads.

Interstellar Angel is an epic, hyper-sexy, reverse harem space opera/sci fi romance and your gateway to the Astral Heat universe, where Star Wars meets 50 Shades by way of The Hunger Games. Laura Navarre delivers turbocharged outer space action with a fearless heroine, a cliffhanger series that ends with a guaranteed happily-ever-after, and a whole lot of heat.

Discover Interstellar Angel and blast off to adventure today!