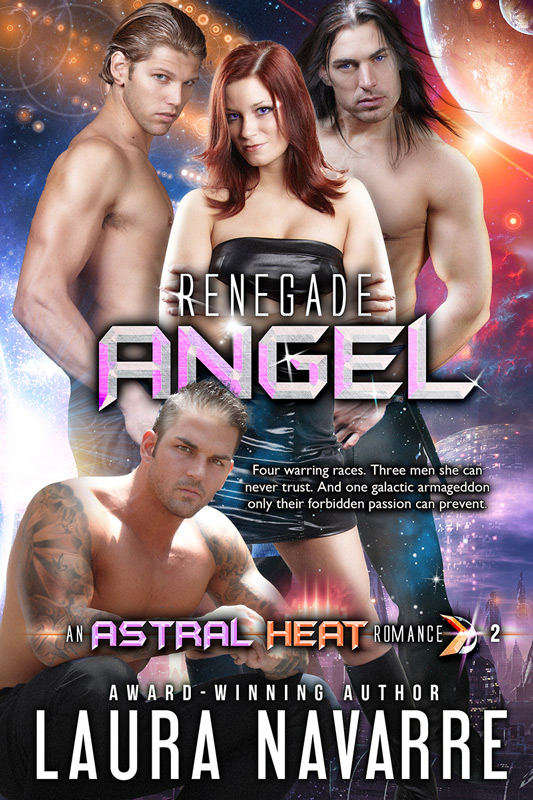 Get Renegade Angel
Back to Reverse Harem Sci Fi Romance

Four warring races. Three men she can never trust. And one galactic armageddon only their forbidden passion can prevent.

In the icy depths of space, a galactic mating contest is turning deadly, and the stakes are atomic armageddon. To unite four warring races, rebel princess-turned-cybergirl Kaia chooses the most dangerous possible mate in Zorin—a sexy, scourge-of-the-galaxy space pirate. Yet she’s seriously tempted by Dex, the imperial enforcer who’s Zorin’s ultimate nemesis…and his mouthwatering obsession. Kaia burns for both of them, but Dex and Zorin are lethal enemies. And the galaxy’s most powerful telepath, the mesmerizing lover who betrayed her and nearly destroyed her, is a major distraction for all three of them.

Can two mortal enemies defy a star-spanning empire that crucifies lovers for unconventional unions? Can a runaway princess dare to trust the enigmatic lover who abandoned her to scandal and disgrace? With the fate of billions now poised in the balance, can four fiercely distrustful allies survive a savage mating contest, navigate an interstellar war, and consummate the explosive passion between them…without dying in the flames?

Renegade Angel is an epic, hyper-sexy, reverse harem space opera/sci fi romance and Book 2 in the Astral Heat universe, a cliffhanger series that ends with a guaranteed happily-ever-after and a whole lot of heat.

Explore Renegade Angel today and escape into your next adventure!